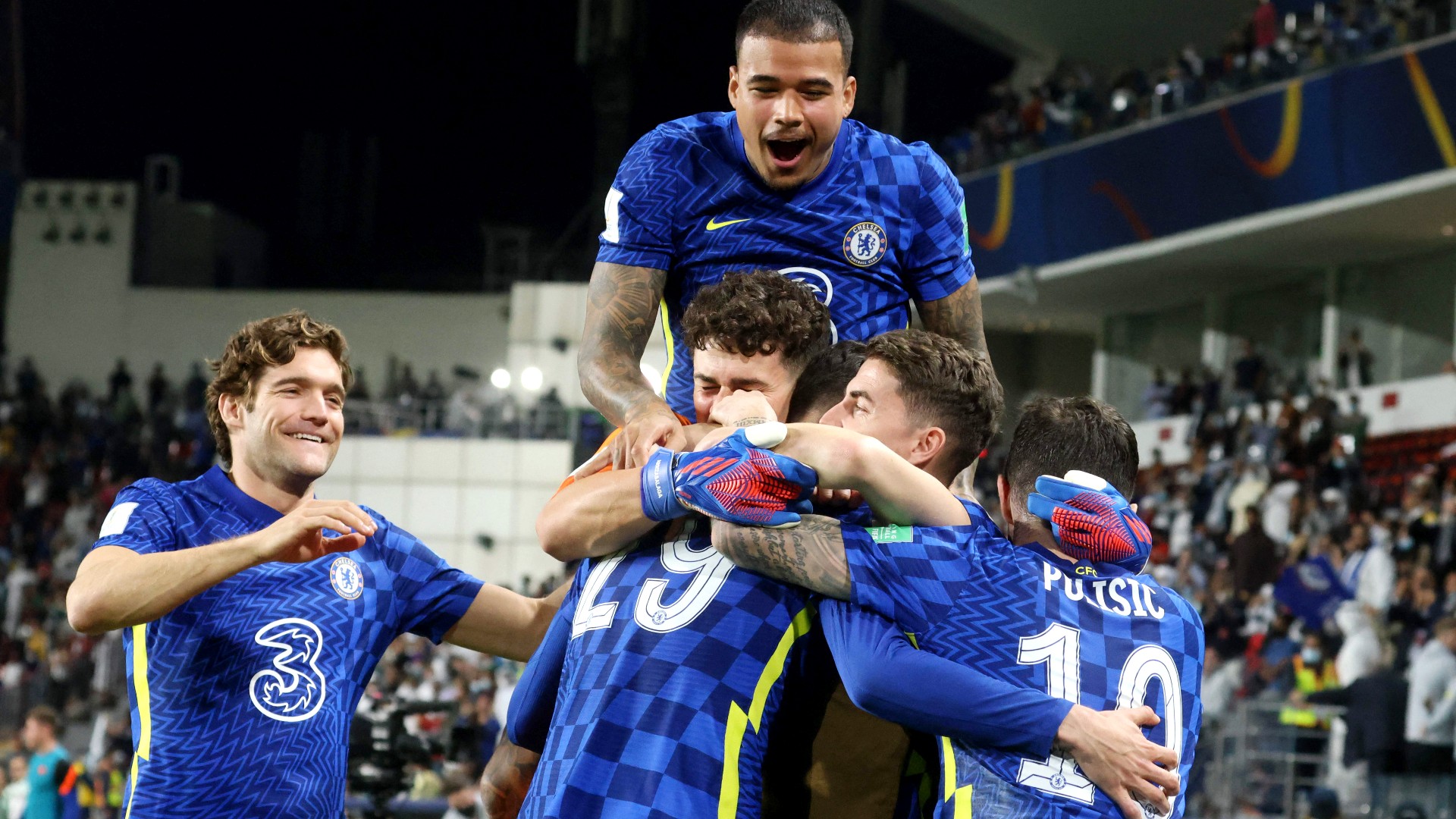 Chelsea has claimed the only international silverware it was missing from its trophy case, winning the 2022 FIFA Club World Cup 2-1 after extra time against Palmeiras.

A Kai Havertz penalty-kick conversion with just three minutes left in extra time helped the Blues avoid a deciding shootout and secure the outright win. It proved the difference, giving Chelsea its first FIFA Club World Cup after it lost the 2012 final to Brazilian side Corinthians.

European champion Chelsea looked on its way to winning the title when star forward Romelu Lukaku put the English side ahead on a clinical header in the 54th minute. But a Thiago Silva hand ball in the Chelsea box gave Palmeiras the opportunity to equalize from the penalty spot just 10 minutes later.

Chelsea brought in several attacking subs and threw plenty of numbers forward in an attempt to get the go-ahead goal, but the match seemed destined for a penalty-kick shootout before the Luan hand ball in the Palmeiras box deep in extra time. Australian referee Chris Beath consulted the video monitor and ultimately pointed to the spot for the second hand-ball penalty of the match.

The ensuing Havertz conversion was a harsh ending to the match for a Palmeiras side which battled gamely, supported by a large and vocal contingent of traveling supporters that dominated the atmosphere at Abu Dhabi’s Mohammed Bin Zayed Stadium.

“It’s a great feeling. We deserved to be here and to win the game,” said Havertz, who also scored the game-winner for Chelsea in the 2021 UEFA Champions League final.

“I was the third penalty taker. Jorgi [Jorginho] and Rom [Romelu Lukaku] were both out. I was the only one on the pitch. The other players gave me trust. They said ‘You do it, you do it.’ … I was [nervous], I have to be honest. It’s a big penalty and a big goal again. Just crazy. It was good that I kept my nerves. I’m happy.”

Chelsea won the UEFA Champions League in May 2021 and then proceeded to capture the European Super Cup in August before adding the FIFA Club World Cup. The Blues will look to defend their Champions League title when they begin Round of 16 play against French champions LOSC Lille.

125th min.: In stoppage time (three minutes given by the referees), the referee went back to the monitor to check on a potential red card and Luan is sent off. Palmeiras down to 10 men after his tackle whiffled on the ball and took down Havertz just outside the box.

118th min.: SUB — Deyverson is on for a defender, Rocha. Palmeiras has to risk it all here.

117th min.: Kai Havertz scores the penalty! Chelsea is in the lead with mere minutes remaining in extra time.

KAI HAVERTZ CAPITALIZES ON A PENALTY IN EXTRA TIME FOR @ChelseaFCinUSA TO TAKE THE LEAD! 🙌 pic.twitter.com/vNBp1DX1Na

115th min.: The referee goes to the monitor to review it and Luan did stick the arm out and deflected the ball. It’s a Chelsea penalty.

113th min.: What a chance for Chelsea! Hakim Ziyech whips in another cross from the right and a Havertz header was deflected for a corner. The Chelsea players were appealing for a hand ball on the ensuing corner and the VAR is giving it a look.

111th min.: Give-and-go between Timo Werner and Christian Pulisic and the German’s shot is high of the bar. Good play by the Chelsea duo. The Blues are definitely sending more numbers forward in an attempt to avoid penalty kicks.

108th min.: Cross by Chelsea’s Hakim Ziyech into the box and Kai Havertz rams into Weverton. The Brazilian milks the clash for a few minutes before restarting.

106th min.: Second extra time period underway. It projects to be just as cautious and conservative as the first 15 minutes.

105th min.: YELLOW card for Palmeiras sub Wesley. One extra minute to be played in the first period.

102nd min.: SUB — Rafael Navarro comes into the match for Dudu. Fresh legs in the attack for the rest of the extra time period.

91st min.: First period of extra time underway with two Chelsea subs as Malang Sarr and Hakim Ziyech are in the match for Mateo Kovacic and Andreas Christensen.

95th min.: Palmeiras goalkeeper Weverton punches away the final corner from Pulisic and moments later the referee signals the end of regulation. Thirty minutes of extra time up next.

91st min.: Five minutes of stoppage time and it’s Chelsea with one of the final attempts. Mateo Kovacic fires high from distance. Pulisic has been handling the set-piece delivery on a free kick and corner, but Palmeiras cleared both.

86th min.: Not much has happened since the subs. It seems like both clubs are recalibrating, but neither has come close to ending this game in regulation. Extra time looking more likely.

76th min.: SUBS — Double change for both clubs. Chelsea brings on Saul Niguez and Timo Werner for the two players who combined for the Chelsea goal (Hudson-Odoi & Lukaku). Wesley (for Rony) and Eduard Atuesta (for Raphael Veiga) are the fresh legs for Palmeiras.

73rd min.: Pulisic’s shot just misses wide left! It feels like Chelsea is closer to getting the go-ahead goal, but Palmeiras is patient, waiting for another opportunity to strike.

71st min.: Palmeiras scorer Veiga gets another look at goal, this time in the run of play, but it’s a weak shot. He’ll watch that back and feel he should’ve done better.

64th min.: Goal Palmeiras. Raphael Veiga sends Edouard Mendy the other way and the Brazilian side is level.

61st min.: Palmeiras is shouting for a hand ball in the Chelsea box. It’s Thiago Silva who had the arm dangling as he went up for a header. He tried to take the arm away at the last minute, but the referee just had a look at it on the monitor and pointed to the spot.

This was the handball called on Thiago Silva to give Palmeiras a penalty to tie it up 👀 pic.twitter.com/6KbvuTOCzA

60th min.: SUB – Jailson is in for Ze Rafael in midfield.

54th min.: Goal Chelsea. Callum Hudson-Odoi with the cross from the left and Romelu Lukaku towers over his defender Luan to head home underneath the crossbar. Palmeiras will now have to take some risks.

Romelu Lukaku finds the back of the net for @ChelseaFCinUSA to take the lead! 🔥 pic.twitter.com/jBr0O6P7Ih

46th min.: Second half is underway and Chelsea immediately resumes its attack. No new subs for either side. Pulisic (for Mount) is the only change made in the game thus far.

Halftime: An evenly matched affair so far. Chelsea is in command, but it’s struggling to be goal dangerous, partly due to the defensive commitment from the Brazilian side. It’s clear that Chelsea can threaten on set pieces, and that may be the best path to a goal for the Blues. Palmeiras is giving Chelsea something to think about in transition, but the Greens are going to need more numbers in attack to get the better of the European champions.

46th min.: Chelsea’s Brazilian Thiago Silva fires from distance before halftime, but Palmeiras goalkeeper Weverton tips the ball wide for a corner kick. Silva and teammate Antonio Rudiger go up for the ensuing corner but they couldn’t get the ball on goal. The two went up for another corner before the halftime whistle and nearly got there. Chelsea is dangerous on set pieces.

42nd min.: This game is being played at a speed which suits Palmeiras. Chelsea is passing the ball around, but it’s not amounting to much of anything. The Brazilians are organized and have done well to close down spaces. Chelsea players who find themselves in the Palmeiras box are immediately swarmed by 2-3 players when the ball heads their way.

37th min.: American Christian Pulisic wins a free kick and decides to take it himself. The shot made it over the wall, but it finished high, missing the target.

28th min.: Another dangerous Palmeiras transition, but Dudu was falling back while firing a shot toward goal and it fizzles wide. But credit to Chelsea for some excellent defensive recoveries to defuse some of these opportunities. Meanwhile, here’s the scene outside Palmeiras stadium Allianz Parque.

24th min.: Chelsea chasing Palmeiras winger Dudu, who gets a shot off anyway and it didn’t miss the top right corner by much. Palmeiras doing well to get numbers behind the ball on defense, but when it pushes into the attack, it has the creativity and improvisation on the ball to be goal dangerous.

17th min.: Shot on goal from Palmeiras. But Rony’s header on goal is caught by Chelsea goalkeeper Edouard Mendy on the goal line.

14th min.: Another Callum Hudson-Odoi cross into the box from the left nearly finds Cesar Azpilicueta at the far post. Outside of Hudson-Odoi’s deliveries and a couple of set pieces from Mason Mount, Palmeiras has dealt with anything that Chelsea has thrown at it.

11th min.: A dangerous Chelsea breakaway is stuffed by Palmeiras at the edge of the area. The Brazilian side is going toe-to-toe with the European champs although it’s Chelsea with the bulk of the possession.

4th min.: Danilo with the shot from outside the box that leads to a corner kick, but Chelsea avoid any trouble.

2nd min: A cross from Callum Hudson-Odoi causes issues for the Palmeiras back line, but Chelsea can’t take advantage.

1st min.: We’re off in Abu Dhabi and the Palmeiras fans are in full voice.

How did the trade deadline affect NBA title favorites?
Will Joe Rogan be providing commentary at UFC 271?